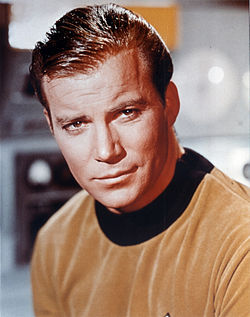 I always loved the old Star Trek episodes, the original television series. Although running for only three years, this show made one of the biggest cultural impacts of any television series ever. In many ways it surpasses Star Wars as creating a type of cultural mythology about the future in space. Coming at the time of the Apollo space program, it reflects the optimism of what technology could bring to the future of mankind. As far as special effects, it was highly advanced for its time, and pre-2001 Space Odyssey and Star Wars, it built the foundation for what was to become the standard iconography of futuristic space travel.

But what made Star Trek work best as good entertainment were the characters, and there are few characters more memorable in television, or film, or anywhere for that matter, than the Kirk-Spock-McCoy triad. These three were perfect foils for the others, and together created a powerful dynamic. Everyone has their favorites, and of course I would have to say that Kirk was always mine.

Kirk bedded many, many babes.

One of the revolutionary aspects about Star Trek was its unabashed sexuality. This was highly unusual at the time, in mid to late sixties television. There are abundant beautiful women, dangerous, intelligent, conniving, caring, sensual and alluring, both human and non human. Yes, even the aliens are hot on Star Trek. I particularly enjoyed the vision of all those hot women on the Enterprise prancing around in their short dresses. Kirk loved it too. Occasionally Kirk would bed some hot, half naked alien too. In a humorous reflection on the cultural schizophrenia regarding sexuality, it seems it was easier for the networks to show an alien woman half naked, than to show an human character half naked, even though both were played by human actresses.

Even the aliens are hot on Star Trek. I always wanted to bed a green alien women myself. It is good to still have goals when it comes to pussy.

I grew up watching nearly every rerun episode of Star Trek on television. I remember even watching it quite a bit when I was in college. I always found it a pleasant break from reality. Now, I can’t seem to find it anywhere on television. What happened? I remember a friend saying to me once, when I was in high school, about how a Star Trek episode went: Kirk fights the bad guys, kills a few people, and then beds some babe. We both enjoyed Star Trek because of Kirk’s physical and sexual prowess. I do not know the percentage, but it seems that in almost every episode there is some hot babe that Kirk is scoring with, when he is not destroying some enemies ship or killing some alien bad guy with his phaser. He was truly an alpha character.

Spock also had a certain sex appeal to girls. I remember one girlfriend told me how she used to fantasize about Spock when she masturbated. I asked her why. She told me it was because he was such a distant and aloof intellectual. Chicks dig that.

But Kirk is the character I most admired. As kids, I think we all wanted to grow up to be like Kirk: fearless in the face of danger, successful in this battles, and ultimately scoring some of the hottest pussy in the universe. Sorry to all those Jean-Luc Picard, Star Trek: The Next Generation fans, but as far as I am concerned, Kirk will always be the greatest commander of the Enterprise.  His intergalactic sexual conquests are proof of that.