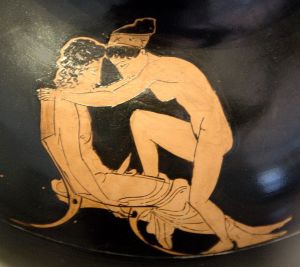 Erotica has been around for eons, as this ancient Greek vase painting shows.

Porn or erotica has been around since people have been around. This is a ancient Greek vase painting from around 430 B.C. The Greeks were very fond of painting different scenes, usually mythological, on their pottery, and this is a fine example. Certainly, this image is meant to incite some sort of prurient interested in the onlooker, even though it still has artistic merits on its own. Most likely it depicts a man and a prostitute, since the ancient Greeks were not too fond of their women doing such things in public. Prostitution was quite legal and quite common in ancient Greece. And remember too this vase would have been placed in someone’s home, or perhaps a brothel, so it would have been very public and visible to many. They were not as squeamish as we are when it came to sex and nudity.  They probably would not have understood the “NSFW” thing when it came to blogs.

Since man first learned to draw, or write, or since he first told stories, the erotic has been part his expression. There is a whole academic field dealing with Greek vase paintings, a serious discipline, with learned tomes written in incomprehensive German or other foreign languages, in addition to English. But it is interesting to note that even in ancient erotica, the figures possess the same standards of beauty that we adhere to today: youth, sleek and sound bodies, large breasts on the woman, a slender yet feminine form.  The Greeks were highly sensitive to these things and created some of the finest sculptures dedicated to nothing more than human beauty. Usually it was a male beauty, but the female beauty is found time to time too. Their perfection in sculpture and their sense of physical beauty was not matched again until the Italian Renaissance, almost 2000 years after the apex of Greek culture in art and literature.