For instance, this first image expresses well the beauty of a woman’s back and ass. It is always beautiful as well as enticing to see the soft yet subtle curves of a woman’s back leading down to her ass. The position of the man’s hands only heighten this even more. His lower hand seems to be about to explore her most secret regions, something which I am most fond of doing with a woman as well. The image is beautiful, but also sensual without being too explicit. 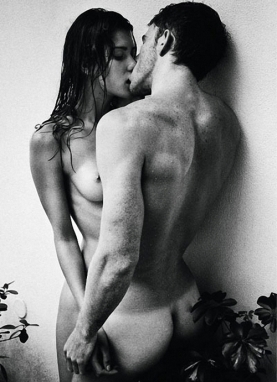 The second image is more explicit, yet still maintains some sort of mystery. We don’t see her whole body, but we see the man’s back, which would be pleasing to the female spectators. Their kiss is tender, but since they are both naked, we know that a deeper and hotter sexuality is probably about to happen, or perhaps has already happened. We really don’t know, which lets our imagination wander, and the use of the imagination is always a great stimulate in eroticism.

Finally, this image is the most explicit. Notice however there is nothing really shown and yet it is still hot. I particularly like the hidden yet still pleasurable expression on her face, as well as the way her panties are curled up around her calves. He is pleasuring her in ways that I enjoy pleasuring a woman as well. And women enjoy receiving such pleasures…