In celebration of Christmas, I thought I would write a little post on one of the great Catholic artists of all time: Gian Lorenzo Bernini (1598-1680). Although Bernini is primarily known for his great sculptures, he was also a great architect and painter. Often the artists of the Renaissance period (although Bernini is technically outside of this period–he is considered more Baroque than Renaissance) were accomplished in different branches of art. Michelangelo, for instance, was both a great painter, sculptor, architect, and even a poet. One of the things I enjoy about this period in artistic history is the variety of skills so many of these great men possessed. The term “Renaissance Man” has always been a favorite of mine, especially in our modern world of narrow specializations. With his works scattered all throughout Rome, it is often said that Bernini did more to make modern Rome look like what it looks like today than any other man.

What is interesting about Bernini, for this blog, is that he progressed in his artistic life from an earlier period where he was greatly attracted to Classical, Greco-Roman themes, to eroticism and sensuality, to a more purely religious and spiritual period later on, without abandoning that same eroticism and sensuality. And yet whether he was creating works that dealt with ancient pagan themes, or themes of a Christian nature, the art work he created was always great. The hallmark of Bernini’s work is his movement: the lifelike and theatrical motion of his figures was the product of his high genius.

One of his early works (ca. 1622) is his Apollo and Daphne. The story is that Apollo espied the wood nymph Daphne one day, and, inflamed by an arrow with which Cupid had capriciously shot him, he chased Daphne. She did not want him, so she prayed to her father, a river god, to free her from Apollo’s pursuit. He in turned changed her into a laurel tree. Apollo, distraught by his failure to win Daphne over, made the laurel his sacred tree and hence the use of laurel as a mark of success in later artistic, athletic or intellectual contests. Bernini captures the moment when Daphne is changing into a tree, just as Apollo is about to grasp her. The work is a good symbol of sexual frustration: the god Apollo is eternally about to, but not quite capture, the fleeing Daphne. 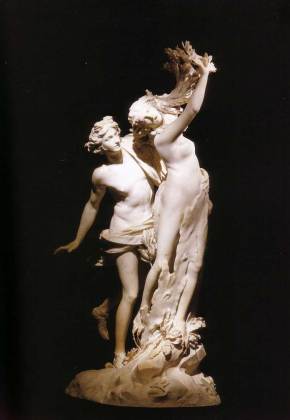 Bernini was so skilled with marble that he could make it seem like soft flesh, as in another early work of his, sculpted around 1621: The Rape of Proserpina. In this story the god of the underworld, Hades, steals Proserpina, daughter of Demeter, who was a  goddess of wheat and agriculture, to be his wife. Demeter is outraged and threatens the world with famine but eventually a bargain is struck between Hades and Demeter where half the year Proserpina will spend on the earth with her mother, and the other half of the year she will spend below in the underworld with Hades, her new husband. In antiquity this was the explanation for the change of seasons: the half of year Proserpina spent on the earth was the fertile time of the year for planting and harvesting; the second half of the year, the winter, was when she spent time below with Hades. It is an old and famous story but one that attracted Bernini first and foremost because of the sexual nature of the story: Hades wanted Prosperina sexually and this is what Bernini emphasizes in his sculpture.

The Rape of Proserpina

What is particularly famous and delightful in his sculpture is how Bernini captures the very fingers of Hades pressing into Proserpina’s soft flesh. It is remarkable and quite sensual. I am sure John Ashcroft would have covered it up as being too pornographic. Michele Bachman, Rick Perry and Rick Santorum, as well as every member of the Tea Party, would most likely like to destroy this image. Imagine, naked female flesh being displayed like that! Such a thing is a threat to “family values”!

Bernini somehow captures the softness of her flesh in marble.

The mixture of spirituality and eroticism in this work is stunning. Her face is clearly orgasmic.

I saw in his hand a long spear of gold, and at the iron’s point there seemed to be a little fire. He appeared to me to be thrusting it at times into my heart, and to pierce my very entrails; when he drew it out, he seemed to draw them out also, and to leave me all on fire with a great love of God. The pain was so great, that it made me moan; and yet so surpassing was the sweetness of this excessive pain, that I could not wish to be rid of it. The soul is satisfied now with nothing less than God. The pain is not bodily, but spiritual; though the body has its share in it. It is a caressing of love so sweet which now takes place between the soul and God, that I pray God of His goodness to make him experience it who may think that I am lying

Notice the language: the “thrusting” of the spear into her, a spear which contains an iron point of fire (seems phallic to me); he “pierces my very entrails” and is deep inside her; he pulls it out and leaves her on fire; the pain “made her moan” and yet there is the “sweetness of this excessive pain”; now that she has been penetrated by this spiritual spear, “the soul is satisfied with nothing less than God”; it was a “caressing of love” between her soul and God. This language is something I would have used in some of my more decadent erotic writings and reminds me quite well of how a woman will describe the feeling of sexual penetration and the longing to have the man inside her afterward.

As a sculptor, Bernini captures the eroticism of this passage brilliantly. The angel appears more as a playful cupid figure than a stern and distant heavenly being, and St. Teresa’s expression is quite orgasmic. Bernini, having enjoyed the sensual pleasures of sexual love earlier in his life, and yet now working as a deeply religious artist, channeled his experiences into a beautiful artistic representation of a deeply spirituality moment. Mystics often say the sensation of a union with God is the most powerful thing in the world, with the orgasm coming in a close second. Bernini certainly depicts this.

So Bernini captured well, among all his other great achievements, a wonderful harmony of sexuality and spirituality. Many of the great masters of the past were able to do this, because many were both deeply spiritual and deeply sexual. It is something that too many modern Christians have forgotten in our overly puritanical approach to faith and sex that we carry on from the Reformation. I say lets get back to some earthly forms of spirituality. After all, Christmas is about the incarnation of Christ, i.e., the belief that God became man, took on flesh, and was one of us. Great artists like Bernini often capture these deep spiritual notions in way that the dry theologians often cannot.

3 thoughts on “Bernini: Great Catholic Artist of Beauty and Eroticism”