This pulp novel, which I recently came across in a used book store and which was selling for thirty dollars, is typical of the genre: scantily clad femme fatale, exotic setting, danger, sex and intrigue always lurking. Great stuff.

The great age of “Pulp” fiction was roughly between 1900-1950. These were the years when many writers could make a comfortable living writing stories for these inexpensive magazines and novels. It is hard to imagine today a time when people read so much for pleasure that there was a huge market to feed that urge, but when you consider that television did not exists, most of Hollywood was controlled by a few moguls who tended to produce the same sort of film year after year, and radio was, well radio, then the existence of a large novel and magazine market for a general reading public is not hard to understand.

What is most interesting about these books and magazines is that they were geared toward a male audience. Think about that. Many, if not most men don’t read today, with sports, television, video games and other visually oriented media and entertainment now appealing to the male mind more so than the verbal. Of course the verbal might be more naturally a feminine inclination, the visual a male, but that does not change the historical fact that there was a time when verbal literacy was highly important among men. Now, it often seems like a thing of the past, at times even derided in certain circles. It does not change the fact that verbal dexterity and power is just as important today as it was in the past. It is hard to succeed in life if you can’t communicate well.

Doc Savage was a common and best selling character in the pulp world.

But back to the pulps. They were often racy, mixing sex and danger, action and adventure and violence. They covered different genres such as: detective, hard boiled crime, science fiction, fantasy, horror, war and westerns. Many great writers contributed to them, or got their start writing for them, such as Rudyard Kipling, Mark Twain, Upton Sinclair, Ray Bradbury, Raymond Chandler, and many others. And I absolutely love the covers! They were a work of art and were designed especially for masculine tastes: the colors are often oranges, blacks, or reds. In fact, early on publishers realized these colors would attract men, especially when you consider that these magazine were being sold on crowded magazines racks, competing against each other as well as other magazines. Those same color schemes are still true today and are still used to attract potential male buyers of whatever product may be being sold. The covers often contained scantily clad women, often in some sort of dangerous situation, often both erotic and violent. In certain ways these magazine and novels were the precursors to modern porn and erotica. In fact, you can see how the genre became more conservative from the thirties to the fifties, with fewer scantily clad women and violent images as concerns over the moral quality of the publications increased. 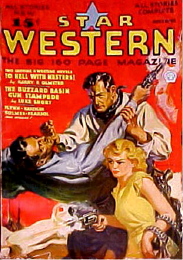 Westerns were one of the mainstays of the pulp world. Notice the cover art, this one by the great pulp artist Normam Saunders: dark colors, orange and black, chosen to appeal to a male audience.

I discovered the existence of this lost literary world a few years ago. It saddens me that such a market no longer exists today. It is simply not there, the magazines are not longer sold, the beautiful art work of their covers no longer produced. It seems as lost a cultural item as something out of ancient Rome; yet it is. There are few online attempts to revive the genre; but as far as I am concerned nothing online can replace the tactile sensuality of a printed book or magazine. One publishing business was created to produce some hard boiled crime fiction novels with the same tastes and old cover art work, but they are few and far between and I doubt they sell well. Recent attempts to revive the genre have usually failed. Again, the market is simply not there.

But most of all, what was so glorious about these magazines is that they were a testament to a lost world of male literacy and interest in literature. In their day they were often considered trash and unworthy by the more high brow elements of society; today many men would have a hard time even reading them due to lack of literacy. I guess it just amazes me that such a reading public once existed, and now no longer seems to. Perhaps I am wrong and overblowing this, but I consider that a serious decline in civilization. 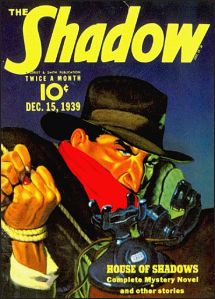 The Shadow was another popular pulp character. Again, notice the dark colors of the artwork, geared for men.

There is much more that can be written on this, so an occasional pulp fiction cover will become a regular post on this blog. The artwork is simply too good to resist.  As I said, it has a connection to erotica, so it is something interesting for me to blog about here. And there are so many nice covers out there I cannot possibly run out of material.  Again, I was in a used bookstore not long ago, and the owner was telling me how a previous owner of the store had a mass collection of pulp fiction stored at his house. He had bought most of it not to read, but simply for the cover art work.  I can totally understand that.