There are few characters in the history of cinema as memorable as Sheriff Buford T. Justice. Played by the great Jackie Gleason in the equally great Smokey and the Bandit, this great man symbolizes so much of what was once great in America: the relentless pursuit of justice, a clear and incorruptible vision of what needs to be done to protect the Western world from the evils of Communism, “she insulted my authority, and that’s nothing but pure and simple, old fashioned communism”, and a love for the traditions and institutions of the American heritage nation (his consumption of a Diabolo sandwich at a local diner is pure Americana at it unpretentious best). 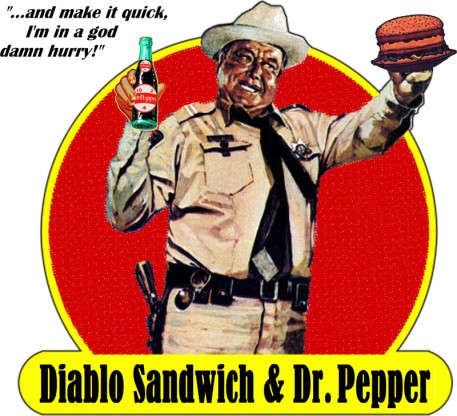 Such a man would not be depicted in today’s cinema. Or at least, he would be comic character, a caricature of all that is good in law enforcement.

Actually, that is what he was in Smokey and the Bandit, a caricature of law enforcement.

Scratch that. The whole movie was a comedy, so it is all in just good fun. Still, there is something quite awesome about Buford T. Justice. We can only imagine how he would react in the face of today’s societal freak show.  Well, most likely he would have reacted the same way he reacted to the freak show of the late seventies, with utter contempt and vile rebuke. Today he would belong firmly in the Trump and alt-right camp.

Even though he is a comic character, Sheriff Buford T. Justice is one of my favorites. God bless him!