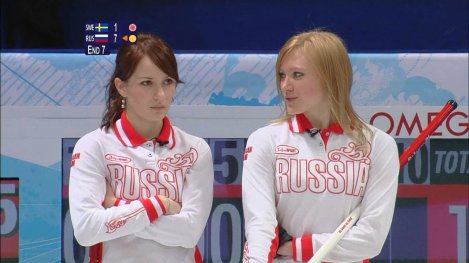 Two of the curling babes on the Russian national team

While a great portion of America is at the moment engaging in the annual idiocy of the Superbowl, a time when the power of corporate America is perhaps demonstrated more stunningly than ever, it is good to remember that there are other sports in the world.

One of them is Curling.

What is amusing about the sports world, which is a rife with pc orthodoxy as any other, especially when it comes to the sports broadcasting networks such as ESPN, is that, at least among the male sports, open homosexuality is absolutely forbidden. Are we to believe that out of all the players on all the NFL and college rosters, there is not a single gay man? If so, the NFL is living in a world which is as delusional as Iran (where the government has publicly stated that there are no homosexuals in Iran). Of course there are homosexual players in the NFL, as in all sports. It is just that they are completely forbidden from ever expressing that openly, at least while they are playing. It is one of last taboos of the professional sports entertainment world, and one I do not see changing anytime soon.

I find amusing how the major sports networks present themselves as the great moral arbiters of racial and social matters, especially when it comes to phenomena of the “black quarterback” or “domestic violence”. Win or lose, I could care less about Cam Newton’s role as a force of racial “progress”. If he wins he will be beloved, if he loses he will not. It is that simple. And why is anyone surprised when players in a sport that is based on extreme violence end up beating their girlfriends or, like O.J., even killing their ex wives.

Oh, and it turns out poor Cam lost the game. I guess he won’t be engaging in his revolutionary dance in the end zone anytime soon. Thank god.

I personally despise the worship of professional sports in our society. Football and basketball are the most egregious, but others not far behind. I think baseball is perhaps the most elegant and graceful and difficult of all the major sports, but the outrageous salaries of the players means that I will never attend a game. There is no way in the world that I am going to pay to watch players who make more money during one game than I do in an entire year.

I have found over the years that it is the amateur sports, the ones where the athletes are unknown, and barely compensated, that tend to be the most enjoyable to watch. It is just sport for sport, without all the ridiculous entertainment that the big power sports of the NFL and the NBA now push on their followers.

The amount of money that the owners of the NFL teams make on this sport is astronomic. They consistently pressure cities to fund their lavish and outlandish stadiums. What a deal! A wealthy multi-billionaire owner gets a city to pay for his team’s stadium, they play there for a couple of decades, then, when the money starts to dry up, they move on to another city that will do the same thing. The saga of the LA Rams-St. Louis Rams, and now again LA Rams is a good example of this.

Then, when the television adds are considered, the Superbowl is a feast of Neronian dimensions. “Circenses et panem”, “Circuses and bread”, was the phrase used by the Roman satiric poet Juvenile to describe the opiates that helped keep the masses of citizens in Rome content in the first century AD. Through mass entertainment and government welfare, the Roman citizens were content with their lot, the elites in power kept things quiet and enriched themselves; but the internal and external pressures that were to eventually unravel Roman society in the centuries to come, and turn the great arenas such as the Colosseum into nothing more than shells of their former selves, where already brewing beyond the borders of the Roman empire. So we too engage in this annual orgy of sheer stupidity, while national debt increases, foreign powers grow stronger, and the mass migration of people fundamentally hostile to Western civilization continues into our societies unabated. 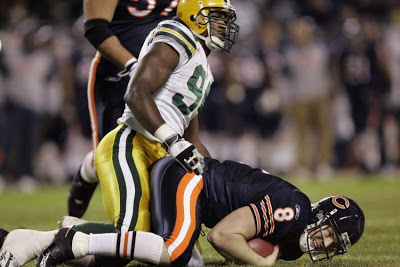 The NFL, a private corporation, has cleverly raised the Superbowl to a national holiday, and during the game, while people are stuffing their face with chips and wings and beer, every major corporation inundates them with messages of what to buy. I cannot think of a greater marketing coup.

Yes, so many billionaire CEO’s pockets are lined by this event that Bernie Sanders should really be outside the stadium during the game protesting.

Of course this is not mention the long term damage this sport does to the players.There is more than enough evidence to show that brain damage is a quite common result of a sport where violent blows to the head are simply part of the game. The most recent case is that of the former quarterback for the Oakland Raiders, Ken Stabler, who died this year from colon cancer, but whose brain was offered to science. The examination clearly showed he suffered from what is now known as CTE, or chronic traumatic encephalopathy, a degenerative brain disease caused by constant blows to the head.

Sometimes you really have to wonder…

We have thick skulls for a reason: to keep the brain safe.

Not that I have any sympathy for football players, I don’t. They are adults and they know what they are getting into, and most would say that they would do it all again even if they suffer from personal injuries for the rest of their lives after they retire. What I find most amusing is the entertainment that others derive from watching grown men pound each other into a state that will eventually destroy the lives of some, if not many of the participants.

But who cares? The corporations make a ton of money, the fans get their annual opiate of sport, and the players get fat paychecks, until at least they are so incapacitated by their old injuries that they can no longer function as normal human beings.

Now, back to curling, which just happened to be broadcast at the same time as Superbowl 50. So, tell me which one is more pleasing to the eye: gigantic men putting their faces in each other’s sweaty asses at the bottom of a pile, or sweet looking babes in black tights gently guiding a hard object down a sheet of ice and screaming, “Hard, hard, hard….yes”, as they do so.

Now, I do not want to denigrate the actual sport of football too much; as an athletic contest, it certainly can be compelling; as far as the players, I do respect their athletic ability. There are many good, fine and disciplined athletes who play this sport. Football is tough and difficult. Even I enjoy watching it on occasion. All sports, including football, often contain great drama and intrigues. They have their rightful place in any healthy society.

What I find amusing is this complete obsession with the Superbowl as the greatest sporting event of the year, when there are so many other sporting events practiced by many athletes that never see the light of day beyond their small band of followers.

More of the lovely Jamie Sinclair…

But If you don’t at least want to switch the channel for a few seconds during the Superbowl to see such loveliness as the babes of Curling , even if just for a moment, and your eyes are continually riveted on the tight asses and big penile bulges of all those manly football men, you really have to question whether or not you are part of the secret, underground and forbidden world of NFL homosexuality.