The Parthenon was a great Greek temple built in Athens to the goddess Athena. Finished in 438 BC, it stood for nearly 2000 years as one of the few well preserved pagan temples of the ancient world. In 1687 it was badly and irreparably damaged  during a war between the Venetians and the Ottoman Turks, who ruled Athens at the time. Today there is some restoration occurring, although the original splendor of the temple can never be recaptured. Since its creation, it has always been considered one of the great architectural works of the world, both for its aesthetics and brilliant construction techniques. It is truly one of the glories of ancient Greece.

The temple contained many magnificence statues along the pediments and frieze by the great Greek sculptor, Pheidias. Most of these were preserved throughout the vicissitudes of time, until in early 19th century, when a British ambassador to the Ottoman Empire, Lord Elgin, removed and transported them to Britain. They are now housed in the British Museum. Their removal was, and continues to be, a major source of controversy. Was Elgin simply vandalizing and plundering this ancient site? Or was he acting judiciously by transporting them to a place where they would be well preserved? And who really owns them? Greece claims they belong to Greece; the British claim that legally, they are theirs. I doubt they will be leaving the British Museum any time soon.

This is not however what interests me the most. What I find most interesting is how they became a source of scandal to the women of Britain at the time they were publicly displayed. Apparently the depiction of such unadulterated male nudity was not something the more proper upper classes of British society were prepared for. Although damaged and in a state of various preservation today, as when Elgin took them, these statues still display some of the finest examples of Greek classical art that we have. To the Greeks, nudity was not something to be ashamed of, and the human body was something to be admired in art as an object of beauty; it never ceases to amuse me how uncomfortable we still are with nudity today in our world, even the artistic depiction of nudity. You will still find the debates among the more religiously conservative as to how to dress, how short a skirt should be, etc. And of course in the Islamic world the need to cover up the entire female body seems to be becoming more and more the norm. Puritanism reigns supreme in many places around the world, including our own society. One of the things I enjoy about Greek art is the completely celebration of nude beauty, a thing which is so antithetical to so many religious circles today. 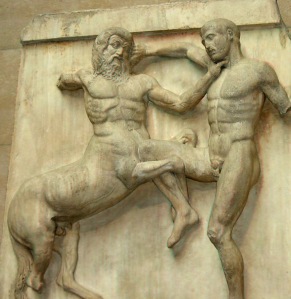 I find this is always something to be on guard against. The Parthenon, although well preserved, did suffer from ancient forms of censorship once it was converted to a Christian Church. It was not uncommon for the more zealous Christians to destroy those ancient nude statues they felt were violating the norms of modesty (in addition to the fact that there was a great controversy in the early middle ages about whether any images should be allowed in Churches, otherwise known as the Iconoclastic controversy). In some ways Islam, having sprung up around the same time as this controversy was raging in the Christian world, is a by product of this, since the prohibition against graven images is quite strong in Islam. Even in the more fundamentalist circle of Christianity today, images are taboo. Images of men and women, especially nude depictions, has a strange way of stirring up strange antagonisms in certain people.

One of the things I enjoy about Catholicism is the completely unabashed celebration of divine things through imagery. It is one of the aspects of the ancient world that the Church has maintained. The results have been some of the great artworks of the world. 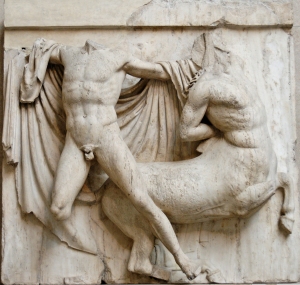 So to this day Greek art, as we see in the Elgin marbles, is a testimony of, and celebration of, beauty through art. Such things are worth defending.