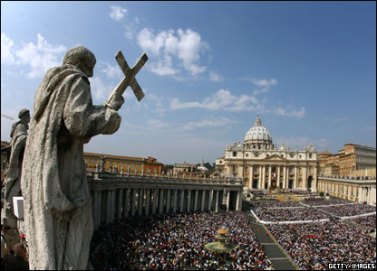 Many Protestants consider Catholicism a pagan religion today. Whatever the case, the Church's indebtedness to pagan Classical antiquity is beyond question.

Recently I just finished a book, entitled, The Religions of the Roman Empire, by John Ferguson. Published in 1970, the book traces the evolution of the myriad polytheistic and pagan religions that drenched the landscape of the Roman Empire, especially from the second to fourth centuries AD. Of course, such a work cannot neglect the role of Christianity at this time, whether for good or bad. He thus ends the book with the following paragraph.

The highest creed of paganism was expressed by Maximus of Madaura to Augustine: “We adore the sole divinity under different names; we render homage to the total divinity under its parts; we invoke through subordinate gods the father of gods and men, whom all men in ways at once different and similar invoke.” To Jews and Christians this was blasphemy. They banged their heads against the wall of tolerance which tried to encircle them; it hurt, but the wall broke. Christianity won, but it had changed in the winning. For one thing, the refusal of Christians to betray their master, itself wholly commendable, led to an unloving intolerance of other people which was not at all commendable. For another, the rejection of compromise, as we have seen, not as absolute as might at first sight appear. For a third, the very achievement of power brought with it spiritual peril. The uneasy question remained. When Jesus said, “No man comes to the Father but by me,” did he mean that only professed Christians could find God, or that all those who come to God are led by the Divine Logos, whether they know it or not? This question still remains.

I find two things interesting in this paragraph vis a vis our world today. First, the statement by Maximus of Madaura concerning the tolerance of paganism and polytheism towards other religions. Admittedly his statement is a rather idealized concept of paganism, although it is generally true. A pagan and polytheistic society is more tolerant of other religions, by its very nature. This is in stark contrast to the intolerance of Christianity, as well as other monotheistic religions like Islam and Judaism, to other religions. Of those three, Christianity is probably the least intolerant, but it is still far less tolerant of differences of religion than most of the ancient forms of polytheistic paganism.

What I find disturbing about much of modern Christianity are the different forms of religious intolerance often expressed and displayed. We see this most clearly in people like Rick Santorum, or Tony Perkins, or many conservative Evangelicals and Catholics. They are intolerant not only of other religious systems, but even more so of those within their own faith based communities who veer from a strict orthodoxy. The Christian hatred of homosexuality is a good example of this modern day intolerance of something that does not fit into orthodox modes of thinking. Homosexuality, despite the clearly biological nature of it, and the fact that it is ubiquitous throughout all of history, is feared greatly by Christians and other religious fundamentalists as a something dangerous to the foundations of society, and contrary to “God’s holy and moral laws”, whatever those are supposed to be. Another form of intolerance would be the disdain of science and evolution by many fundamentalist Christians, or, as the Opus Dei inspired Rick Santorum would put it, “alternative theologies.” There is even a museum in Kansas called the “Discovery Museum” which supports the idea of creationism over evolution, and has displays of dinosaurs and humans together, just to prove the point. Seriously. This stuff exists, and people go to view it, burying their head in a fanatical and fundamentalist religious orthodoxy which does not and cannot yield anything to modern science if it seems to contradict the Bible. I suppose they still think the Earth is flat. It used to be these people were merely amusing distractions in the world, but they acquired a growing political power in this country through the Evangelical takeover of the Republican party, aka, the American Taliban. As Ferguson states above, on the triumph of Christianity over paganism, “The very achievement of power brought with it spiritual peril.” The more the fundamentalist Christians in this country succeed politically, the more power they amass, the more they make Christianity look like a religion of dangerous, ignorant and intolerant fanatics. Then again, this is what most Romans thought of them. After witnessing Rick Santorum, Opus Dei, the Legion of Christ, and the Evangelical fundamentalist nut cases, as well as many other religious fundamentalists in my lifetime, I am starting to wonder if those ancient Romans were not on to something.

We could go even further in all this, and describe the internecine warfare and hatred among different Christian denominations, or even within those denominations. The fighting and intolerance never ends: Catholic vs. Orthodox, Catholic vs. Protestant, Christian vs. Muslim, Muslim vs. Jew, Christian vs. Jew, etc. The “unloving intolerance of other people” is still a sad fact of Christianity. The Christian blogging world is replete with this. The verbal hatred and venom spewed from one Christian to another on some of these blogs would be amusing, if it were not so pathetic.

The Temple of Artemis at Ephesus, one of the Seven Wonders of the Ancient World. It was ultimately destroyed by a Christian mob.

Two examples, one ancient, and one modern, will elucidate the problem of religious intolerance. In the ancient world there were many beautiful pagan temples, often great works of art. One was the temple of Artemis in Ephesus, considered to be one of the Seven Wonders of the Ancient World. Built in 550 BC, and although greatly damaged by a Gothic invasion in 268 AD, it saw its final demise in 401 under a Christian mob led by St. John Chrysostom, one the greatest of the ancient doctors of the Church. Perhaps the temple at that time has been sufficiently damaged by the Gothic invasion of 268 to render it not worth saving; we will never know. Whatever the case, a mob led by a Christian saint in the service of destroying beautiful works of art because they were pagan was not uncommon in the late Roman Empire. It was the final end of that great and monumental work of pagan and polytheistic religious devotion. Christianity simply could not tolerate its existence. 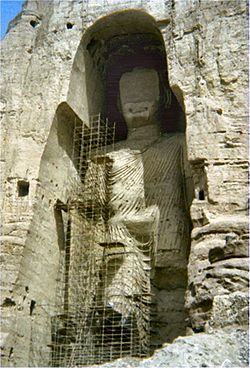 Ancient monumental statue of Buddha in Afghanistan, destroyed by Taliban mob in 2001.

We see the same phenomenon today. On March 2, 2001, the Taliban destroyed two ancient and monumental statues of Buddha in Afghanistan. These revered statues had been in place since 507 and 554 AD, roughly the same time that Christian mobs in the now defunct Roman Empire were demolishing what was left of pagan statues and temples. Like the early Christians, the Taliban simply cannot tolerate another religion in their midst. Statues are an idolatry, a witness of something that existed before their religion came into being. The world pleaded for these great statues to be saved, irreplaceable works of art, but the morally pure Taliban refused to listen. God cannot be affronted by idolatry. The statues were blown to bits, just like the beautiful Temple of Artemis was completely destroyed in the name of God by religious fanatics.

Where the ancient statue once stood, now a sad memorial to religious fundamentalist fanatics, like the leader of the American Taliban, Rick Santorum.

The ancient Christian-modern Taliban/Christian fundamentalist is a parallel that cannot go unnoticed. Religious intolerance is an ugly and dangerous thing, perhaps one of the most dangerous things in the world today. It is the worst form of tribalism, because the tribalism of religious fundamentalism means that your tribe has God on its side, and is therefore good, while the other tribe clearly does not, and is therefore evil, absolutely evil unless they join your religious tribe, and if they do not join, deserves to be eliminated, all in the name of God and moral purity.  I am sure this was lodged somewhere in the distorted minds of the 9/11 hijackers before they flew those airplanes into skyscrapers. They cried out to Allah before they met their fiery deaths, and their one way ticket to hell.

But what is interesting and even ironic about the Christian and Islamic hatred of other religions is this: we still live in a world that is fundamentally pagan and polytheistic. What I mean is this. If someone were to observe the world as a whole, an outside observer say from another planet, he would see different and competing religious systems all over the world. Perhaps Maximus of Madaura was correct when he says, “We adore the sole divinity under different names.” There is not one clear God worshiped by all of mankind, but rather, numerous gods still worshiped. There is the Christian God; there is the Islamic God; there is the Judaic God, all claiming to be the one true God yet all competing with each other. Furthermore, each one of the great monotheistic religions have their hierarchy of little deities within them, whether angels or saints, a clear link to the polytheistic world that existed before these religions came into being. Then there are all other religious systems, such as Buddhism, Hinduism, Shintoism, etc., which are more truly polytheistic in a traditional sense. So there are in fact different gods still being worshiped in different forms, often a myriad of them, as has been the case for all of human history.  But a fundamental difference today is that a per capita majority of those monotheistic belief systems, i.e., Christianity and Islam, deny the validity of all other systems, and claim absolute and immutable truth, and this has and continues to lead to hostility, intolerance, violence and warfare, all in the name of God.

A beautiful nude woman. If Rick Santorum, Opus Dei, The Legion of Christ, Tony Perkins, the Iranian Ayatollahs and Afghanistan Mullahs had their way, you would NOT be allowed to view such an image, all in the name of the God and his holy, and moral laws. I say fuck them all.

How different this is from ancient polytheism, where a variety of different religious systems existed, and people were not killing each other in the name of one god or another. So 1600 years after St. John Chrysostom lead his Christian mob of fanatics to destroy the temple of Artemis at Ephesus, how advanced are we really today? I wonder this, for instance, when I see the Christian conservative John Ashcroft covering statues in the Justice Department because they show a breast, or a museum frequented by fundamentalist Christians because it displays dinosaurs and humans together, because the Bible says so, and I wonder this when I see a bunch of goat fucking peasants in Afghanistan rioting and killing innocent people when one of some of their holy religious books are accidentally burned.

To all of them I say one thing: Fuck You.

14 thoughts on “Pagan Polytheism Is Still Alive, Despite Monotheism’s Best Efforts to Destroy It.”