Religious questions can be quite entertaining...

Recently I finished a small but powerfully written book on the world of pagans and Christians in the third century AD: Pagans and Christian in an Age of Anxiety, by E.R. Dodds. Dodds was a great classical scholar, a good writer, and the Regius Professor of Greek at Oxford for twenty years. He retired in 1960. He possessed a thing which is becoming rarer and rarer today in the world of academia and scholarship: he could write a good book on an esoteric topic, without jargon, that was also deeply learned and accurate, and easily comprehensible to the layman. This was a art that was cultivated quite well by older British scholars.

Dodds main premise is that personal religious movements often arise out of the psychological anxiety that is engendered by political turmoil, and the third century AD was a very tumultuous time, as the Roman Empire was beginning to become more strained and uneasy politically, militarily, and culturally. There were many religious movements at the time, many from the East, such as the mystery cults of Mithras and Isis. Christianity was one of these many competing religious movements.

I often wonder what made Christianity the most successful of these different religions? Why did it triumph while the others vanished? It is a complex question, one that cannot be answered in a simple few lines. But Dodds does succinctly theorize some of the reasons why Christianity succeeded, and the other religions passed away. He gives a few interesting hypotheses.

To begin with, Christian martyrs were admired by the pagans. As Dodds points out, paganism was a religion not worth dying for, whereas Christians did die for their religion. This type of courage in the face of death was something always admired and respected in the ancient world, and the Christians displayed it better than others. The example of martyrs, although historically not of a great number, did leave a deep impression on the pagan mind at the time. 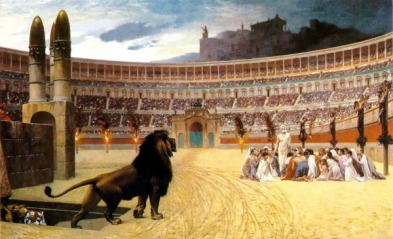 Christian martyrs in the Colosseum: one of the enduring images of early Christianity.

Christianity also offered a clear and unambiguous road to salvation. There were literally thousands of little cults and deities that one could choose from in the late Roman Empire, and the sheer number must have been very confusing for those seeking some sort of spiritual path. Christianity was clear in its beliefs that it was the one true religion and its “refusal to concede any value to alternative forms of worship” meant that those who became Christians knew and were confident that they had found the one truth. Today Christian intolerance may seem to be problem and I think it is in many ways, but it was precisely that intolerance towards other religions in its early years that allowed it to define itself clearly in the face of competing religious movement. This helped its survival.

Next, Christianity was inclusive, whereas most religious movements were exclusive. It was open to all social groups. One did not need to be educated, to be member of the aristocracy, to be wealthy or powerful in order to belong to the Church. Rather, the mass of Christians actually came from the most disadvantaged and disenfranchised sections of society, such as slaves and women. The pagans mocked this at the time as being a weakness, but in fact the ease of becoming a Christian for any and all interested fueled the spread of Christianity.

It also offered a clear hope of personal salvation. Heaven was a possibility for anyone; eternal life was the ultimate message of Christ. This was a much more powerful message than, say, the transmigration of souls preached by other religions, or a vague notion of unity with a divine being after death. Christianity preached the resurrection of the body after death, which was a radical concept at the time. For most spiritual movements, the body is dissolved forever after death, but with Christianity the body lives on in a state of heavenly bliss for all eternity with God. Christ was real man who rose from the dead. This gave people something that was sorely missing in the ancient world at this time: clear hope of real afterlife. 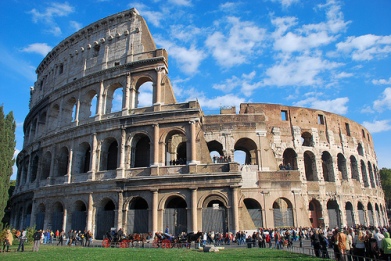 The pagan Colosseum passed away as did pagan Rome, but the Christians remained.

And, perhaps most importantly, Christians were the most well organized religion, with a sense of community unlike any other at the time. This gave people living in a very large and impersonal world, a world of mass movement and political turmoil, a sense of belonging to some community of people who cared about them. This has always been one of the great strengths of Christianity, and even the pagans at the time had to begrudgingly acknowledge this. Christians took care of their own, they helped widows, orphans and the poor, they buried their dead, and this created a cohesion unlike anything in other religions at the time. Today we take the Christian influence on social welfare for granted, but at the time Christians revolutionized the ideas and practice of helping others. One of the tragedies of the recent clerical sex scandal was the fact that many of the men involved in sexual misconduct, either in the deeds themselves or in the cover up, were deeply involved in the care and helping of others. There were stories of how Cardinal Law would often show up at the hospital without notice to minister to people who were sick. But no one remembers that or credits him with such things now. Such acts of charity were lost in the justified furor over the terrible crimes committed by so many.

Again, this a very simple summary of a very complex topic. There are many other aspects of the dialogue between Christianity and paganism at the time which Dodds covers, but I have not mentioned here, such as the relationship between ancient philosophy, such as Platonism or Neo-Platonism and Christianity. But, what his book show is that the world of the Late Roman Empire was very different from our own, but also quite similar at the same time, interesting, sophisticated and tumultuous, with a multitude of religions, and much psychological angst, much like our own. One big difference however, not mentioned by Dodds, is that Christianity at the time was on the ascent, whereas today it is more on the descent, at least in the Western world. We once again live in a more religiously amorphous world in the West. So, in some sense, perhaps humorous, 1500 hundred years after the triumph of Christianity in the West, the old pagan gods and ideas never really went away, they simply went underground and have now returned. Whether this is a good or bad thing remains to be seen. Whatever the case, I now wonder how Christianity will fare in the West now, when we are once again in a world of vastly different and competing religious movements and experiences and great political changes and psychological anxieties.

If Tony Perkins and Rick Santorum are any indication, the future of Christianity in the West is not looking too bright.

7 thoughts on “Pagan and Christian in an Age of Anxiety”