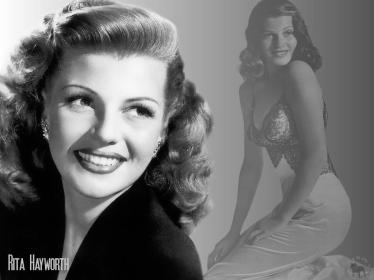 The other night I saw Rita Hayworth (1918-1987) for the first time in a movie, the film noir classic, Gilda, where she starred opposite Glen Ford. When I first saw her, in a classic moment from the film where she lifts her head up into the screen and flips her luxurious hair back and smiles, I immediately asked myself, “How the hell did I completely overlook this classic beauty up till now?” She is truly one of the most stunningly beautiful women I have ever seen.

As far as an actress (as well as singer and dancer), I don’t know much about her, except to say that her physical features were about as perfect as can be. She was a sex symbol of her time. Before Gilda, she had already gained famed for a photograph of her from a 1941 Life magazine that GI’s at the time were pinning up all over the place. It later resurfaced as a famous prison prop in the film, The Shawshank Redemption. As a star of the sliver screen, whose two best films are the noir classics, Gilda (1946) and Lady from Shanghai (1947), she embodied the dangerous beauty of the femme fatale. Her latent eroticism was best on display in Gilda. There is even a notorious scene where she does a striptease and, even though she only ended up removing one glove, her dancing is filled with sensuality and sexuality, as she moves evocatively about the dance floor in a tight and low cut black gown. The cheap pole strippers of today have nothing on her, and could not replicate the eroticism of that scene, no matter how hard they try. It was what she did not show, but only implied, that was so powerfully erotic. As she said in an interview later on, “Everybody else does nude scenes, but I don’t. I never made nude movies. I didn’t have to do that. I danced. I was provocative, I guess, in some things. But I was not completely exposed.” The most powerful eroticism is that which appeals to the mind first and last, and leaves much to intrigue and imagination. It is often best to be “not completely exposed”. This is sorely lacking in film today. 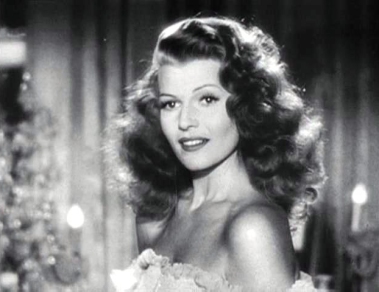 Hayworth in Gilda, a classic moment in cinema.

How perfect was she? She was aptly called the “Goddess of Love”. Yes, she is certainly a goddess of love. As I said, I wonder where she has been my whole life? Having never seen her before in a movie, I was astounded at just how gorgeous she was. Her features are sharp, yet still soft and feminine; her lips were considered the most beautiful of her time, and she often had many connections with lipstick companies to better sell their product. In Gilda, her beauty is exquisitely highlighted, and the studios took full advantage of this. It seems as though every scene of her in that movie is itself a lovely work of art, a canvas of film beauty painted brilliantly by the cinema photographers of the time. Gilda shows how movies can be true works of art on different levels, from the purely visual, with her beauty portrayed brilliantly, to the deeply psychological, with her feisty and dangerous eroticism bubbling just beneath the surface of her lovely features. For a man watching, it is a all quite intoxicating.

In her famous silk nightgown photo. I suppose Rick Santorum and the American Taliban would consider this porn...after all, look at those lovely breasts, enticing us with such sexuality!

Even as she aged she was still quite beautiful, as for instance in the 1957 film Fire Down Below, with Robert Mitchum and Jack Lemon. Unfortunately she had deep problems with alcohol, and her career suffered as a result. She made her last film in 1972. At the end of her life she suffered from Alzheimer’s, which is one of the reasons she retired from film at such an early age.

Ronald Reagan, who also suffered from Alzhiemer’s, spoke of her at her death in 1987: “Rita Hayworth was one of our country’s most beloved stars…Glamorous and talented, she gave us many wonderful moments on stage and screen and delighted audiences from the time she was a young girl. In her later years, Rita became known for her struggle with Alzheimer’s disease. Her courage and candor, and that of her family, were a great public service in bringing worldwide attention to a disease which we all hope will soon be cured. Nancy and I are saddened by Rita’s death. She was a friend who we will miss. We extend our deep sympathy to her family.”

Given his own demise from the same disease later on, this is particularly touching.

I could delight in such beauty all day long...

But let us remember Rita Hayworth in all her lovely beauty! She was truly one of the most beautiful women ever to have starred in film.

4 thoughts on “Classic Beauties: Rita Hayworth, the “Goddess of Love”.”