The Bull: an ancient symbol of strength, power and sexuality.

I was talking to a friend today who grew up on a farm. He was describing how his father had a bull. “He was one mean son of a bitch,” he told me. He also described how sexually aggressive  the animal was. “I saw him once leap over a six foot fence to get to a cow in heat. When it comes to pussy, nothing will stop a bull.” As two men, we both laughed, since we could both understand such needs and actions.

Bulls are indeed fascinating creatures. At up to over 2,000 pounds, they really have no natural predators in the wild, except perhaps large carnivores in packs. Even a grizzly bear could not kill a full grown, powerful bull. Most likely the bull would kill the bear, through disembowelment with its razor sharp horns. They are huge and massively muscular, yet also surprisingly fast and nimble. As the leader of a herd of cows, a leadership won in the wild only after fighting off a rival bull, the fruits of which are unlimited mating with as many cows as possible, they are truly alpha animals.

I feel a particular fondness for the bull, because Taurus, the bull, is my zodiac sign. One of the attributes to Taurus is a deep and primal sexuality, something which I certainly possess. I often wonder how strange it is that so many of our personality attributes actually mesh with these astrological signs. My own sexuality is quite similar to the bull’s: earthy, violent, explosive, in constant need to satisfaction. I like to fuck and fuck a lot. When I see a hot women, like the bull jumping over a six foot fence, I want to have her. It is something that takes over me. Like a bull I like my sex hot and physical. Like a bull I have massive balls…but I digress.

Bulls have also held a deep religious significance since the dawn of time. For instance, they were depicted as some type of religious art 17,000 years ago in cave paintings in Lascaux, France. Think about that: 17,000 years ago. That is 15,000 years before the advent of Christianity. I wonder how Rick Santorum and the other flat earthers reconcile that with the Biblical truth that the earth was only created 6,000 years ago. I am sure he thinks it is some sort of liberal conspiracy or something…but once again I digress. After all, this post is about something Santorum, who is the most asexual of politicians, finds troubling and wants to ban: sexuality. 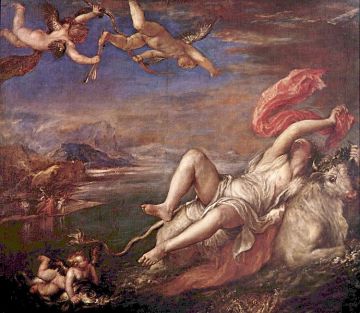 Related to religion, mythology also possesses many bull narratives, often of a sexual nature. Pasiphae, the wife of king Minos of Crete, fell in love with a bull and wanted to mate with him, so the great craftsman Daedalus was hired to create a wooden cow for Pasiphae to hide in while the bull copulated with her. The offspring was the Minotaur, ferocious half man and half bull monster. In another story, Zeus, the king of the gods, seduced Europa in the form of a beautiful, snowy white bull. There is famous painting of this by Titian called the “Rape of Europa”. There are countless other bull stories of such a nature from different cultures and societies throughout time.

The Bullfight: Man vs. Beast. Those horns will kill you.

And then of course there is the whole modern spectacle of bull fighting, right or wrong. It is the one last vestige of the ancient Roman love of watching men fight animals. Hemingway wrote magnificently about the bull fight in his novels, showing a great appreciation for the strength, power and beauty of the creature. It is undoubtedly a cruel practice, but one that still asserts a fascination over us today. I admit I would enjoy watching a bull fight if I ever get the chance.

You don't want to mess around with such an irascible creature.

So today, after talking with my friend who grew up on a farm, I had a renewed appreciation of the bull. Today, in our highly urban societies of the West, we really don’t experience or even appreciate  these ancient, primal symbols of sexuality the same way our ancestors did. They are indeed magnificent creatures, and, as the ancient cave paintings show, have captured the imagination of us for many thousands of years. For someone as sexual as myself, I find a strange kinship with these powerful creatures of raw strength and lust. They are, after all, in their unbridled, aggressive and powerful sexuality, a creature worth appreciating.