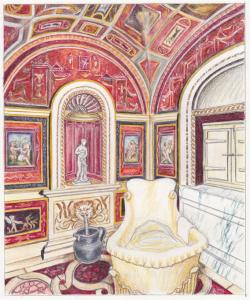 What it does reveal is a room painted by the great Renaissance artist Raphael, commissioned in 1516 by the then Cardinal Bibbenia, who was a man who, like many Renaissance cardinals, enjoyed the finer of things of life, including good art. Raphael chose as his theme many pagan images…many sexually explicit pagan images. The room is called the Stufetta della Bibbiena, the “small heated room of Cardinal Bibbiena,”. I guess it was sort of a bathroom or bedroom for the Cardinal. Today it is part of the Papal apartments and so access is severely limited.

What is in the room? Well no one was quite sure until this reporter from Slate, Tony Perottet, got access. He only saw the room for a few minutes, but that was enough to render in a rough drawing his impressions. As he says in the article about the Cardinal and his room:

“He (Bibbiena) was also the author of risqué plays and an erudite man-about-town. Like his peers, Bibbiena was entranced by the ribald pagan imagery that was being unearthed in Imperial Roman ruins. He asked his friend Raphael to decorate his lodgings in the fashionable classical style, complete with naked nymphs being spied upon by lusting satyrs, with no anatomical detail hidden.” 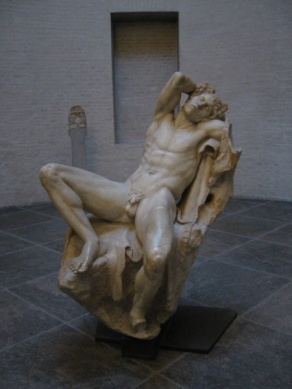 The unearthing of ancient statues such as this often helped artists such as Michelangelo better portray the human body.

The room is actually tame by today’s standards. Perottet describes it:

“That tight, vaulted room—twice as high as its 8-foot width—was covered with cavorting naked deities. Raphael had designed his frescoed panels like a graphic novel, recounting the adventures of Venus, the goddess of love, and Cupid, the god of erotic desire, for Cardinal Bibbiena to admire as he lounged in his hot tub. At knee level, the original silver faucet was crafted into the face of a leering satyr. One panel showed the naked goddess stepping daintily stepped into her foam-fringed shell. In others, she admires herself in a mirror, lounges between Adonis’ legs and swims in sensual abandon. A couple of the frames, even more risqué, have been destroyed. One, recorded by an early visitor, showed Vulcan attempting to rape Minerva.”

But the most hilarious part of the article is this section. Perottet is in the room with a monsignor, his ever watchful guide. He goes on to relate:

“Embarrassingly, I had to ask the monsignor to stand aside, so I could get a proper view of the most notorious image, of the randy goat-god Pan leaping from the bushes with a monstrous erection. I was shocked to see that the image had been vandalized. Someone had etched out Pan’s manhood and filled in the gap with white paint. This, of course, made the object even larger and more noticeable—another parable about the futility of censorship.”

An enormous erection which had been whitewashed out? That is hilarious. Apparently this was too scandalous, and perhaps too much of a visual temptation, for more than one “member” of the clergy, so to speak. And yet the whitewashing out did nothing more than highlight what had been once there. Such things only inflame prurient interests, not eliminate them. As Perottet says, it is a good “parable about the futility of censorship.”

For instance, here is a famous phallic image from the Roman world. 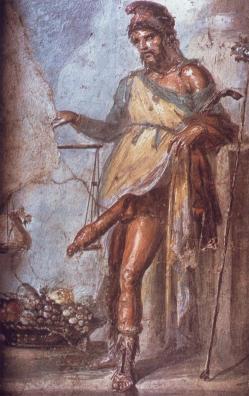 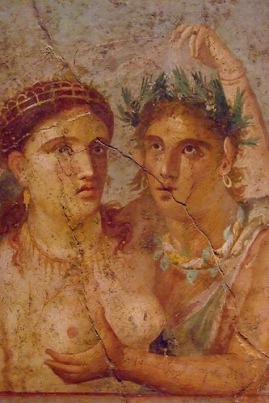 Roman boobies!!! Hide your eyes!!! Call Rick Santorum to wipe this smut out!!! 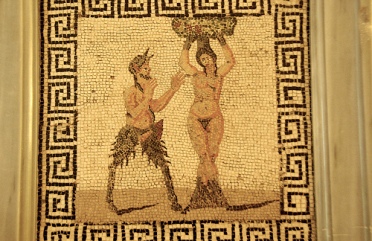 Previously forbidden Roman mosaic unearthed from either Pompeii or Herculaneum depicting an obviously aroused Satyr and captive nymph: ancient bondage going on here as well as bit of bush on her...oh yeah.

But back to the Stuffeta della Bibbiena: If these are indeed paintings by the great Raphael, why these are not allowed to be studied by art historians is a good example of the mindless repression of all sexuality that often goes on in religion. Yes, they are scandalous. Yes, what they depict is contrary to much of Christian thought. But they are also good art too, painted by one the great artists of all time. In a private collection they would worth untold millions. And yet the world is not allowed to see them, even if through an art historian or scholar’s work, because they are too controversial. Being part of the Papal apartments, obviously they would be off limits to the general public. Yet art historians and other scholars could and should be able to study and evaluate them, for the sake of historical knowledge and criticism. I think as adults we can handle this sort of thing. I myself am quite curious as to the artistic quality of these paintings, and not for their supposedly lurid and lecherous details. If I want lurid and enticing there is plenty of porn out there.

Unfortunately, when comes to even good and even controversial art like this, too many of the Church hierarchy think we are mindless children who need to be told what to do and think. Well, that is why such groups as Opus Dei, the Legion of Christ and Regnum Christi exist after all, isn’t it?  We need to be protected from ourselves

2 thoughts on “The Vatican’s Secret Room of Renaissance Art: A “Parable about the futility of censorship”.”