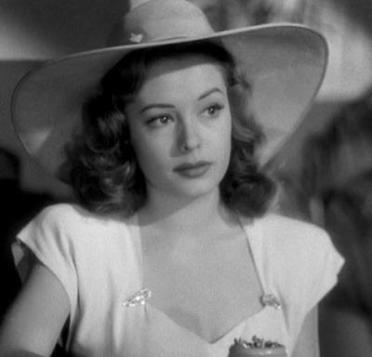 The beautiful Jane Greer in the classic noir film, Out of the Past.

I love the women of noir film. If ever you want to immerse yourself in something which as antithetical to the white knighting Victorian image of the morally pure woman that so many still cling on to, just watch noir films. The women are beautiful, dangerous, sexual and completely amoral or immoral. They act first and foremost out of their own self interest. Most of the men who get caught up in their lives end up destroyed or dead by the end. And yet the men find them intoxicating. We all know how women fall for bad boys. And yet, if noir films are any indication, men can fall for “bad girls” too.

The women of these films ooze sexuality. The men love them. They fall hard, throw everything away, and become themselves amoral in their pursuit of these femme fatales. One gets the sense, by the way these women are portrayed, they were great in bed, sexual dynamos, and all men love a sexual dynamo. They are a sexual drug to the cynical and tough male leads in these films. 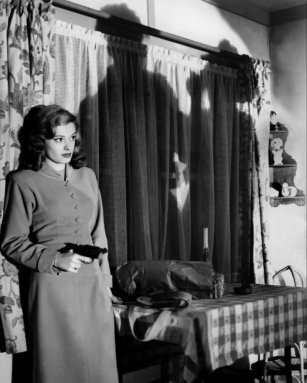 Jane Greer as Kathie Moffat in Out of the Past. Men love a woman who packs heat...and is not afraid to use it.

Out of the Past is considered one of the great Noir films. It has contains all the elements of the true noir genre. Robert Mitchum, perhaps the king of all great male noir leads, plays a tough and cynical private detective trying to escape his past, but never really succeeding. He is manipulated by a classic femme fatale, the beautiful Jane Geer, in in a performance that is considered perhaps the best one or two noir femmes of all time. Kirk Douglas is cast in an early role as an enthusiastic and powerful criminal who is trying to set the score straight for things in the past that both Mitchum and Geer did to him. And yet he is also under the spell of Geer’s character. In addition there is the standard bevy of gangsters, hit men, night club owners, and other shady characters. 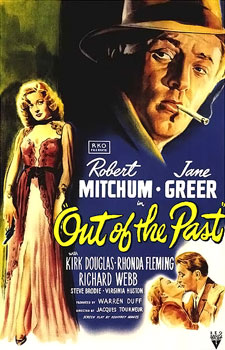 One of the all time great noir films.

The film is a sensuous display of light and shadows. I have often mentioned how Renaissance painters, such as Leonardo, used something called “chiaroscuro”, the subtle mixture of shade and light, to achieve an almost dream like affect in their works. Noir films also use this technique, and none does it better than Out of the Past. It creates of world that is far from ideal, a world of  doubts, fears, toughness, double crossings, manipulation, and overall uncertainties about exactly what is going on in the plot. The concrete urban settings of many noir films, usually Los Angeles or New York or some other large metropolis, reflect a stark, cynical realism that is needed among the characters if they are to survive their personal circumstances. Much tobacco and alcohol are needed to help these people get through each day. 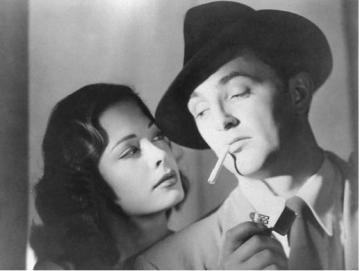 Mitchum and Greer in Out of the Past. The use of light and shadows is a classic element of noir films.

The dialogue of these films are great too. The noir film genre grew out of the hard boiled detective novel, the great writers of which were Dashiell Hammett and Raymond Chandler (who wrote The Maltese Falcon and The Big Sleep respectively…and both books were adapted into great nor films starring Humphry Bogart). Both these writers, heavily influenced by Hemingway, wrote in a sharp, crisp, pointed and economical style which is then transferred to the screenplays of these films. The dialogue is often sharp, witty, terse and tough. The men and women engage in a banter with each other that is both seductive and intriguing. The plot is heavily dependent upon the dialogue, so it is important to follow along, which requires a bit more attention from the viewer and sometimes the plots can be quite convoluted and confusing. But this works well for the noir film because life can often be quite convoluted and confusing and these film are seeking to mirror some of the darker aspects of life. Hence the term “noir”.

One nice example of good dialogue is this snippet from Out of the Past: Cynical private eye Jeff (Robert Mitchum) says of femme fatale Kathie (Jane Greer) “She can’t be all bad. No one is…Well, she comes the closest.” Classic. 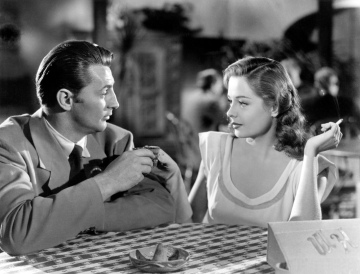 Mitchum and Greer: the sophisticated and civilized game of mutual seduction begins.

So there is a realism to these films which is quite appealing. Life for most of us is difficult. There are bad and evil people in the world. We are going to be manipulated at some point, people are going to leave us, things are going to seem difficult. Life is not all the American dream of working hard and finding your dream. No, you can work hard, and still get fucked over by the system. Noir films express this quite well.

And then there are the women. What can I say? There is no other genre outside of porn where women are portrayed as tough and sensuous and sexual and self centered as these creatures. The women are real. In the world of white knighting, especially among the religious and feminists, women are the morally pure and superior beings, usually helpless victims preyed upon by terrible male sexuality. In the noir there is a certain equality between the sexes: both men and women act in their own self interests to get what they want. And this is more true to real life than the fantasy of the morally pure, virginal Victorian maiden that so many men and women want to see women as. The women of noir are sultry and sexual. They are intelligent, often outsmarting the men in their lives. They won’t hesitate to sleep with someone to get what they want. They are beautiful. They are dangerous. There is always an undercurrent of sexual tension running through the film, even though there is never any sex scene actually displayed, and, when some love scene begins,  everything simply fades to black. And I can understand how the male leads are always falling in love with them. 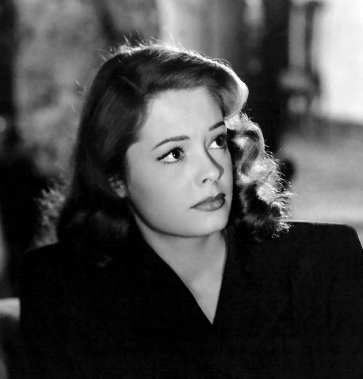 Greer is quite lovely. She could melt Mitchum's heart with that soft look, yet still be as cold and calculating as ice underneath.

So noir films are a great contrast to the fantasy world of sexuality and human behavior that so many want to engage in, and then impose on the rest of us. No, women are not simply pure virginal maidens; women are sexual beings too, flesh and blood like the rest of us, with just as many vices and flaws as men, who can be just as manipulative and dangerous as men. And I love them! 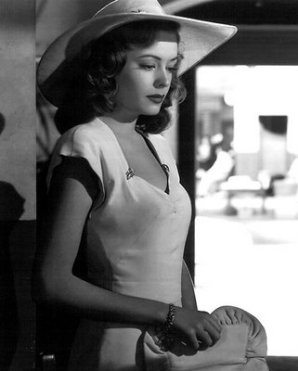 More Greer: I mean, she is just hot.

You get the sense of noir women would be real screamers in bed too. Other great female noir stars would be Lana Turner, Barbara Stanwyck or Lauren Bacall, just to name a few. Each one needs their own post. Indeed.

1 thought on “The Beautiful Women of Film Noir: Jane Greer”