I am always amazed, well not really, but sort of, how prudish so many people can be. We live in sexually schizophrenic world. The secret world that people live in, the world of seduction, unfulfilled desires, hidden affairs is all around us. Unhappy wives, unhappy husbands, the glow of a once promising marriage now dulled by years of boredom and irritation, the anxieties and financial burdens of children and houses and expensive educations, all these things often work together to create ripe environment for hidden sexual behaviors. Like beasts lurking in the woodland shadows, our sexual desires are always there, lurking beneath the surface, wanting to reassert themselves despite whatever chains of restraint our present circumstances have thrown around us. But when we do indulge these passions, it is often in a closet of shame and secrecy. For instance, most women masturbate, have erotic desires and fantasies, and even like to fuck, yet many are ashamed to admit this. Many fear being slut shamed. There is still some sort of stigma attached to these basic aspects of our sexual selves. I personally love watching a girl masturbate–it is extremely hot–and encourage all women to take up the practice. It is one of the best ways to learn about one’s sexual responses.

I suppose this is simply part of human nature, no matter what society you live in. Some people are highly sexual, have deeper sexual appetites, and pursue sexual pleasure more casually than others. Others are not. There is plethora of websites devoted to displaying images of girls who have taken naked pictures of themselves. There is a plethora of websites devoted to those who would love nothing more than shut down the former websites in the name of decency and purity. There is plethora of religious people out there, especially men, who are crusading against sexual immorality, while themselves engaging in the same behavior. There is a plethora of people openly engaging in the same lusty behavior the morally pure are upset about. Why are we often so uptight about sexual desires and practices?

I love sex, eroticism, erotica, and the whole world of beauty and passions. The world is imbued with these things. We once tried to crush the ancient gods of sex, but they are still there, like those beasts in the dark forests, lurking and waiting and ready to reassert themselves in our daily lives. Why hide these things? Why live in shame and embarrassment at our desires. We are sexual beings. We are sexual animals. This does not deny out spiritual side; but to deny the animal side is just as destructive as denying our spiritual side. 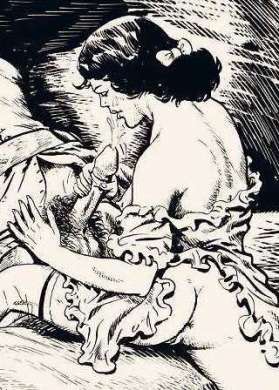 This image, which I got from Eros Blog, depicts visually what was often depicted verbally in the underground Victorian sex novels. I'm not sure, but It seems like it could be have been drawn during that era.

The world of sexual shame, secrets and hypocrisy we live in, people saying one thing in public, doing another thing in private, is always a source of great amusement for me.