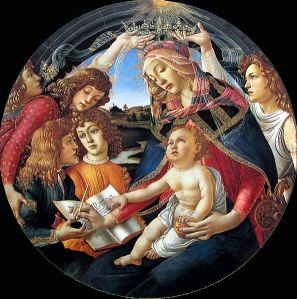 Madonna and Child by Botticelli, 1485. Even in his religious paintings, Botticelli enjoyed depicting beauty.

Most people would not consider Catholicism a religion of sensuality. But the problem is not with the idea of sensuality in itself, but what we mean by sensuality. For most people, sensuality is often exclusively connected with sexuality. And this is a valid connection. However, what I mean by sensuality here is not so much the sexuality associated, but rather the idea of something that appeals to the senses, to the five senses, touch, smell, taste, sight and hearing. Catholicism is unparalleled among religions for best tapping into those five senses.

There is a physicality to Catholicism that has always appealed to me. It is a tactile religion. You go to confession, and confess your sins to another person, who is acting in persona Christi. You actually eat and drink the body and blood of Christ in the Eucharist. You bless yourself with holy water. You kneel and pray in different liturgical ways, using your body in an act of prayer. For Catholics, (as well as Orthodox) you exercise both your spirit and your body in liturgical worship.

I have always believed that Catholicism, despite the difficulties of some of its teachings on human sexuality, has always been much more in tune with the natural rhythms of life, and sexuality, than other religions. There is an earthiness to the Church’s teachings on these matters. The prohibition against contraception, however unpopular in today’s world, is basically an acknowledgment of the fundamental realities of life, that we cannot go on as race, society, culture or nations, without procreation. Sex cannot ultimately be separated from this fact without consequences. The current population implosion in Europe, and the dire consequences it portends, is a testament to an entire people turning away from the natural rhythms of sex and fertility. As others have pointed out, it was Catholicism that made marriage a sacrament, a holy thing, and lifted sexuality to a new level of meaning hitherto unheard of. Christianity sanctified married sex and turned it into something holy. Most happily married couples would probably concur about the sanctity of sex in such a context.

This understanding of human sexuality and the primacy of procreation is also a type of sensuality. It is natural. It is time honored. It is imbued with wisdom. The State cannot take care of us; in the end, it is only our blood, our family members, who truly care for us. I wonder what life will be like in a few decades when the aging, childless populations of the Western world are suddenly at the mercy of impartial, health care bureaucrats. They do not care at all for your well being; rather, the aged will be looked upon as financial burdens to be disposed of as quietly, quickly and cost efficiently as possible.

Catholic art, especially of the Renaissance variety, is filled with this sensuality. It is this link with the physical world that gives Catholic art its special sensuality. Great Catholic art is unabashed in its celebration of beauty. Even though the Madonna is a sacred image, she is always portrayed as beautiful on Catholic art. To the painters of the time, influenced by the growing neo-Platonism of the Renaissance, physical beauty was often a reflection of spiritual beauty. And why are there so many Holy Families, or Madonnas and Child? Is this not a type of celebration of an earthy fertility, the word made flesh? There is nothing more primal to sexuality than a mother and her child. It is, after all, what sex is ultimately about, procreation. The family, that most physical of social institutions, is the great focal point of much of Catholic art, as it was of the overall society at the time. It is an interested contrast to our own fragmented family lives today. 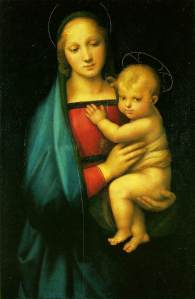 Madonna and Child by Raphael, ca.1500. I enjoy the quiet, pensive tone of this painting.

It was also the Catholic Church that patronized the very artists who returned Western art to a type of naturalness in form that had not been since the end of Classical antiquity. And yet many of these artist who produced great Catholic works of art, also produced art that was controversial, such as Botticelli or Michelangelo. Some of these works were considered at the time, and for many centuries afterwards, and even today in some quarters, pornographic. Why? Because they depicted the beauty of the human body. They painted nudes. And as we know from our own cultural schizophrenic reaction to nudity, this is still a difficult subject for most people to handle, even in art.

So I enjoy this aspect of Catholicism, at least the type of Catholicism that is not tainted by the neo-Jansenist, puritanical strain that often affects North American Catholicism. It is a physical, earthy type of Catholicism, yet one that is still rooted in the spiritual truths of the faith. It is, at least as art and liturgy are concerned, a celebration of beauty for the sake of beauty, and a beauty that ultimately derives spiritually from God.

3 thoughts on “The Sensuality of Catholicism”